It seems that the Narendra Modi Government has begun its first day with a controversy. The Minister of State in the Prime Minister’s Office (PMO) Dr Jitendra Singh has said that the government is in the process of repealing the Article 370, which guarantees a special status to Jammu and Kashmir. 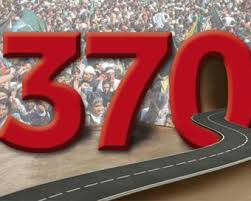 Article 370 of the Indian constitution is a law that grants special autonomous status to Jammu and Kashmir. Article 370 specifies that except for Defence, Foreign Affairs, Communications and ancilliary matters (matters specified in the instrument of accession), the Indian Parliament needs the State Government’s concurrence for applying all other laws.

This unique status is granted to Jammu and Kashmir and similar protections exist in tribal areas of India including those in Himachal Pradesh, Arunachal Pradesh, Andaman & Nicobar Islands and Nagaland.

The BJP has been opposing the special status for Jammu and Kashmir since very long. It had earlier claimed that it could not repeal the Article during the Atal Bihari Vajpayee government due to the lack of a majority. But now BJP has won more than half seats in Jammu and Kashmir therefore government is already started the process of repealing the Article 370, it is a psychological barrier said by PMO Dr. Jitendra Singh

Now question arises here will this repealing will affect the indian constitution as well as jammu kashmir ?

Jammu & Kashmir Chief Minister Omar Abdullah has reacted strongly to the statements made by MoS, PMO on repealing Article 370 in the state. He condemned the move saying, “Mark my words & save this tweet – long after Modi government is a distant memory either J&K won’t be part of India or Art 370 will still exist” on Twitter. now these two tweets of Omar Abdullah gave a birth for spicy debate over repealing of Article 370